Monrovia City Mayor Jefferson Tamba Koijee is calling on Africans especially those in charge of leading climate change efforts including the new killer -extreme heat to take the lead giving the fact that the continent is at greater risks of the adverse impact of heat.

The Monrovia City Mayor spoke at events marking the launch of the City Champions for Heat Action Initiative in Freetown, Sierra Leone on October 20, 2021. The Initiative is being run by Adrienne Arsht-Rockefeller Foundation Resilience Center at the Atlantic Council through the Extreme Heat Resilience Alliance (EHRA) with the aim of supporting cities in addressing heat related risks cognizant of the fact that heat is the new killer of human and economies.

Mayor Koijee indicated that he would pick from bold step of the Mayor of Freetown, Yvonne Aki-Sawyerr to put in place a proactive framework in Monrovia that will enable the City of Monrovia to begin working to ensure that life threatening effects of heat does not take the Liberian capital by surprise like the Ebola Virus Disease pandemic did a few years ago.

He stressed that foreign partners would support but it takes Africans themselves to take charge of these issues in order to protect the continent that is already regarded as one of the hottest part of the planet. 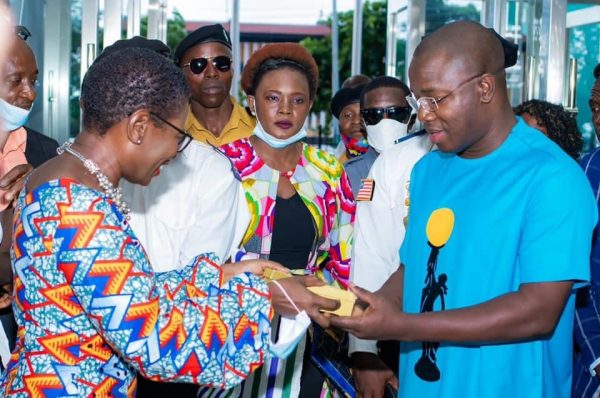 According to him, the City Government of Monrovia will draw inspiration from the Freetown’s version of the initiative to safeguard against future danger.

“Climate change is not just unique to Africa but a threat to the world. These threats are worsened by human behavior. The choices we make and the way we conduct ourselves in the environment can adversely affect everything in terms of climate change. The fact that is being launched in Freetown is a clarion call to us, leaders of the continent to begin working together and rally around the Mayor of Freetown to ensure that issue of climate change can be adequately communicated so that we can save our people. We don’t want to be taken by surprise like Ebola did,” he told the audience at the event.

Mayor Koijee thinks that the earliest the measures put in place to address the situation, the better it would be for the continent recounting that Liberia has six months to experience high temperatures from the dry season when sun is usually at extremely high temperature.

Also speaking at the event, Freetown City Mayor, Yvonne Aki-Sawyerr said approach to mitigate the impacts of climate should be holistic or migration would become another crisis issue as people in hot places would move to places they find more convenient.

Yesterday, we launched the City Champion for Heat Action Initiative, of which Freetown is a founding member.

She stressed that extreme heat is a cause for concern for the Council as many residents of Freetown (up to 35% of the population) live in informal settlements and in homes made of zinc, which exposes them to potentially lethal levels of extreme heat. The Initiative allows the first Chief Heat Officer in Africa, appointed through Innovation SL, to raise awareness of extreme heat risk, and to implement and track initiatives that reduce the heat-related climate risks.

The launch of the Initiative was attended by senior staff of the Monrovia City Corporation; the Ambassador of Liberia to Sierra Leone, Madame Musu Ruhle and members of the Atlantic Council, Kathy Baughman-McLeod and former Mayor of Quito, Mauricio Rodas were also present. The event was also attended by representatives of Councillors and staff of Freetown City Council, CDMCs, EPA and the Sierra Leone Metrological Agency.